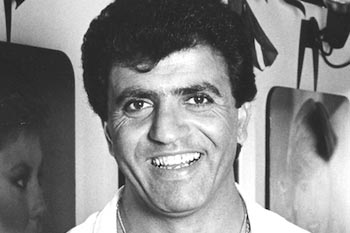 Australia’s best-known hairdresser has already disrupted the Australian boat market once with the launch of Stefan Boating World. Now Stefan Ackerie is contemplating shaking it up again with a new venture. Nigel Bowen investigates why a man who’s already achieved so much is driven to keep adding to his varied list of accomplishments.

I’m a Phoenician, it is in my blood,” laughs Stefan, a.k.a Steve, Ackerie when I ask when he first became interested in boating. “My father fiddled around with boats and I’ve always been keen. Soon after I arrived in Australia from Lebanon at 17 I bought a Lewis racing hull skiff and since then I’ve always had boats. Boats for barefoot skiing, houseboats for staff functions, power boats for racing and luxury boats like Hairazor.”

The Phoenicians, who primarily resided on the coastline of what is now Lebanon circa 1200-539BC, were renowned for being enterprising traders as well as skilled boatbuilders and sailors (they’re credited with the invention of the bireme, a high-speed galley powered by two decks of oars). So if Ackerie describes himself as Phoenician it’s probably because a civilisation built on two of his great passions – business and boating – has a strong appeal to him, even if it did die out two millennia ago.

Ackerie left Lebanon and arrived in Adelaide back in 1957. Within a decade he’d moved north and started what was to become a large chain of hairdressing salons throughout Queensland.

Since then he has marketed various hair and beauty products, opened a restaurant in Brisbane, got a pilot’s licence and bankrolled several charity initiatives such as a food van for homeless people and a foundation to deliver toys to hospitalised children. He’s also been showered with business awards such as Employer of the Year (he’s famous for acknowledging the efforts of high-performing staff with tokens of appreciation such as Mercedes-Benz cars) as well as being nominated for Australian of the Year.

While all that might have been enough for other men, Ackerie also found the time to become one of the dominant figures in Australian powerboat racing. “My involvement started when I was asked to sponsor a boat in the early 80s,” he explains.

“One day I was taken out – they were trying to scare me but I loved it and started competing in events such as the Cairns to Brisbane race. Then the man who had the best boat and team in Australia passed them on to me when he retired from the sport and it went from there.”

Obviously uncomfortable with the idea that there might exist any limitations to what he can do, Ackerie quickly turns the conversation to Stefan Boating World, the new venture he’s sunk $10 million into. We’re speaking a few days before the official launch at the Sanctuary Cove International Boat Show and, as we chat, staff members keep popping in to ask Ackerie for his input or sign-off on various last-minute dramas and details.

Early press coverage has focused on the cheapness of the wares on offer but Ackerie wants to make it clear his offerings are impressive as well as affordable. “I’ve never been a person to compete on price. So, yes, while these boats are financially a good deal that is not their greatest asset,” he insists. “Their greatest asset is that they have a point of difference: there’s the RIB with a clear bottom, which is great in clear water, and there’s something called the Razar Cat that’s a combination of a Jet-Ski and a rubber ducky. I’m also importing all 12 boats from the Karnic Open Line range, and they are the most luxurious small boats I’ve ever seen. They can be used as overnighters or luxury fishing boats.

Three decades on, having notched up achievements such as the fastest crossings of the Bass and Malacca Straits, as well as nearly coming to grief at least twice in fiery incidents caused by exploding tanks, he’s showing no signs of slowing down. “People have trouble understanding why I do it, but I have trouble understanding why people play football or golf. What I’m doing now is record runs, which is easier than racing because you can pick your day. When you turn up to a race and it is 12-foot whitecaps, that’s tough.”

Perhaps it’s time to embrace the more genteel pursuit of yacht racing, I suggest. “Peter Harburg is one of my best friends and he’s always trying to get me to come out racing on Black Jack. But I’m scared to take him up on the offer in case I like it. I think it takes time to get good at things and I don’t know if I have the time to get good at that.”