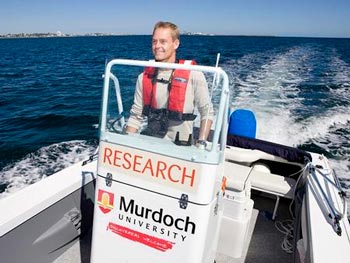 A scheme experimenting with unconventional methods of data collection is promising to turn any smartphone-equipped Western Australian into a marine researcher.

How to collect data across large areas with limited resources is an issue that most Australian marine biologists face. But for those working in Western Australia, a sparsely populated state with 20,781 kilometres of coastline, the problem is particularly acute. So it’s little surprise that researchers from Murdoch University’s Cetacean Research Unit in Perth are experimenting with unconventional methods of data collection.

“Take the snubfin and humpback dolphins that are found in north-western Australia,” says Associate Professor Lars Bejder, when asked to explain the challenging conditions he and his colleagues at the Cetacean Research Unit have to work in. “There was recently an application to have them listed as a protected species that was denied because there was not sufficient information available to evaluate whether or not they should be listed. Given the area that would need to be surveyed and the funding available, it would take decades to gather the required information using traditional scientific methods.”

The solution? The Cetacean Research Unit, in collaboration with North Carolina’s Duke University  and Blue Cloud Spatial, a project of Marine Ventures Foundation and the Ocean Foundation in Washington, DC, is in the process of creating a vast citizen science experiment that will collect observations made by local residents, Indigenous Australians and even tourists across one of the last great marine wildernesses on earth using free social media tools. In the near future, every fisherman, beachcomber, surfer, scuba diver or boat owner with a smartphone will have the opportunity to provide time-stamped and geo-referenced images of whatever marine life they come across.

“It’s not a new idea, scientists have been experimenting with using social media for a while,” notes Bejder. “What’s novel about it, apart from the vast distance covered, is that it’s open access and that we’ve refined the idea into three levels.

“The first level is essentially just dots on a map – if someone is out fishing and sees a whale shark they take a photo of it with their iPhone, which is uploaded onto a communal database and mapped online in near real time. This data can be extremely valuable for baseline assessments in remote regions. The second level involves empowering larger organisations, say, a group of 50 people who clean a particular beach every weekend. With the social media tools we provide they can log what they see. Once you do that you start gathering information about encounter rates and, potentially, conservation hot spots.

At the third level, you take the data that you’ve gathered from the previous two levels and use it to start designing detailed scientific surveys. We’re combining a whole set of data streams that will help obtain baseline data on what is out there in the marine environment. What’s great about this is that there are going to be different levels and quality of data that can be connected and used.”

And it’s not only scientists who stand to benefit. In keeping with social media ethos, the project’s database is open to everyone; something that Bejder believes will allow communities to develop conservation strategies tailored to their particular environment.

“One of the problems with this kind of information in the past is that it’s been very difficult to access, especially for non-scientists. Most places have their own problems and the data that’s gathered will be available to help the local community clarify what is and isn’t an issue.”

Of course, the project will only work if a critical mass of Western Australians get involved, but the initial indications are that those living in one of the world’s most beautiful landscapes are highly motivated to conserve their coastal environments, especially in the face of increasing pressure from oil and gas companies to exploit the Western Australian coastline’s abundant natural resources.
“It is important to make the point that this isn’t about fighting oil and gas companies,” says Bejder. “Development is going to happen and it is important that it does happen. But the pace with which it is happening is exceeding the scientific resources available. What we’re trying to do is quickly collect more data so that management decisions are made with scientific rigour.

“But, yes, people want to take care of their backyard, they want to have a voice. They’ve never had an outlet to help inform science and management decisions directly and I think this gives them a tool to become part of that and I think that’s what people are embracing. We’ve been giving talks about this all across the state and people are chomping at the bit to get involved.”

Duke University’s Dave Johnston is similarly excited by the project, saying, “The remote nature of this coastline is a challenge for scientists and natural resource managers charged with conserving its unique resources. What we learn in Western Australia can guide similar projects in other remote marine wilderness regions under similar development pressure, such as the central coast of British Columbia.”

With social media already having transfigured everything from how political processes unfold to the way the media functions, Bejder is convinced the world of science is destined to be similarly impacted. “Social media is very powerful and as time goes on I can see these types of citizen–scientist projects becoming more and more common around the world. If you want to be a leader you have to be at the forefront, looking for new and alternative methods of acquiring data, and we’re certainly very interested in doing that.”